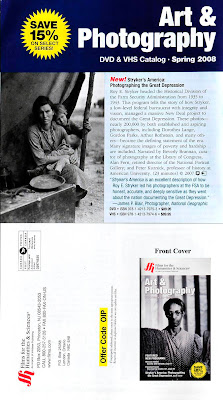 Stryker’s America, a new documentary by Laurence Levin and Justin Schauble, is the featured, cover selection on the 2008 Films for the Humanities & Sciences Spring Catalog (www.films.com).

Stryker’s America creatively weaves the tale of a small “New Deal” program within the Department of Agriculture as it single-handedly recorded the iconic images of the national tragedy today known as “The Great Depression.” Roy Emerson Stryker was the unlikely leader of the History Division of the depression era FSA. Not a photographer himself, Stryker recruited and directed a passionate and diverse group of photographers who traveled America and documented the ongoing human tragedy.


Stryker was charged with providing dramatic and hard-hitting photographic evidence that illustrated the extreme level suffering then being experienced for the U.S. populace and for Congress. Stryker’s final product exceeded his charge, kick-started the careers of some of the 20th Century’s most celebrated photographers, and re-defined documentary photography. The images from this collection include, Dorothea Lange’s “Migrant Mother," Arthur Rothstein’s “Dust Bowl” and Gordon Park’s “American Gothic.”

“Brilliant documentary filmmaking,” said Frank Van Riper of the Washington Post. “Levin and Schauble offer a warts-and-all look at Stryker and his cadre of young photographers… and at a government program that began as propaganda and blossomed… into a priceless historical record of America between the two World Wars.”

Films for the Humanities & Sciences is the nation’s leading distributor of educational media to libraries and higher education. Julian Chiabella, FHS Acquisitions Manager, described Stryker’s America "as an involving illumination of a fascinating period of American history. It is a wonderful supplement to history, photography and government class curricula.”

Stryker’s America is available exclusively from Films for the Humanities on their website: www.films.com/ 800-257-5126